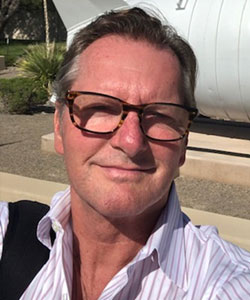 Dr. Zachary S. Davis is a Senior Fellow at the Center for Global Security Research at Lawrence Livermore National Laboratory and a Research Professor at the Naval Postgraduate School in Monterey, California, where he teaches courses on counterproliferation. He has broad experience in intelligence and national security policy and has held senior positions in the executive and legislative branches of the U.S. government. His regional focus is South Asia.

Davis began his career at the Congressional Research Service at the Library of Congress and has served with the State Department, Congressional committees, and the National Security Council. Davis was group leader for proliferation networks in LLNL’s Z Program and in 2007 he was Senior Advisor at the National Counter Proliferation Center, in the office of the Director of National Intelligence. He is the author of numerous government studies and reports on technical and regional proliferation issues. He currently leads a project on the national security implications of advanced technologies, focusing on special operations forces.

Davis's scholarly publications include articles in Orbis, Asian Survey, Arms Control Today, Security Studies, The American Interest, and chapters in numerous edited volumes. He was editor of the widely read 1993 book The Proliferation Puzzle: Why States Proliferate and What Results. His edited book on the 2002 South Asia crisis, The India-Pakistan Military Standoff, was published by Palgrave Macmillan. He is the editor of several recent books on emerging technology: Strategic Latency and World Power: How Technology is Changing our Concepts of Security; Strategic Latency Red, White and Blue: Managing the National and International Security Consequences of Disruptive Technologies; and Strategic Latency Unleashed: Emerging Technology for Special Operations Forces. Davis holds a doctorate and masters in international relations from the University of Virginia and an undergraduate degree in politics from the University of California at Santa Cruz.

Artificial Intelligence on the Battlefield: An Initial Survey of Potential Implications for Deterrence Stability and Strategic Surprise (LLNL, 2019) (forthcoming)

Editor, with Michael Nacht and Ron Lehman, Strategic Latency and World Power: How Technology is Changing our Concepts of Security. (LLNL, 2014)

"The NPT: Coping with the Best and Worst Cases," in Raju Thomas, ed, The Nuclear Nonproliferation Regime: Prospects for the 21st Century (New York: St. Martins, 1998).

"Nuclear Nonproliferation: Where Has the United States Won – And Why?" in Henry Sokolski, ed, Prevailing in a Well Armed World, (Carlisle PA: U.S. Army War College, 1994).