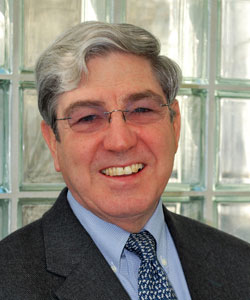 The Honorable Ronald F. Lehman II is the Counselor to the Director of Lawrence Livermore National Laboratory. For the State Department, Lehman Chairs the Governing Board of the International Science and Technology Center (ISTC), an intergovernmental organization. For the Defense Department, Ron was one of the original members of the Defense Threat Reduction Advisory Committee (TRAC) and was its Chair from 2014 though 2019 having previously served as Vice Chair.

Lehman was Director of the U.S. Arms Control and Disarmament Agency from 1989 to 1993, when START I, START II, the Chemical Weapons Convention, Conventional Forces in Europe. Open Skies, and other historic agreements where concluded. Previously, he served in the U.S. Department of Defense as Assistant Secretary for International Security Policy, in the State Department as Ambassador and U.S. Chief Negotiator on Strategic Offensive Arms (START I), and in the White House as Deputy Assistant to the President for National Security Affairs. He has also served on the National Security Council staff as a Senior Director, in the Pentagon as Deputy Assistant Secretary, on the Senior Professional Staff of the U.S. Senate Armed Services Committee, and in Vietnam commissioned in the United States Army. In past years, he served on the Presidential Advisory Board on Proliferation Policy, on the State Department's International Security Advisory Board, as chair of the NATO High Level Group, on the governing board of the U.S. Institute of Peace, and as a U.S. representative to a number of United Nations disarmament and review conferences including co-chair of US delegations to the 1990 NPT Review Conference and the 1993 Paris CWC signature conference.

Lehman co-chaired (with David Franz) the National Academy of Sciences' study on the future of Cooperative Threat Reduction and formerly co-chaired (with Ash Carter) the Policy Advisory Group on nonproliferation for the U.S. Senate Foreign Relations Committee. He was on the Defense Science Board Task Forces on Globalization and Security, on Tritium, on Global Strike, and on Defense against Biological Weapons. He is served on the National Research Council Committee on U.S. Air Force Strategic Deterrence Military Capabilities in the 21st Century and served on the National Research Council's Committee on Science, Technology, and Health Aspects of the Foreign Policy Agenda of the United States and on its Committee on Alternative Technologies to Replace Anti-Personnel Landmines. He was detailed to the Administrator of the National Nuclear Security Administration as counterterrorism coordinator after the September 11, 2001, attacks. For the Department of Energy he was the U.S.-Snezhinsk Working Group Co-Chair for the Joint Russian-American Steering Committee on the Nuclear Cities Initiative. He served on the advisory panel for USSTRATCOM's Global Innovation and Strategy Center. He was on the Council on Foreign Relations Independent Task Force on the U.S. Nuclear Posture. He was a Public Affairs Fellow at the Hoover Institution on War, Revolution, and Peace at Stanford University and an Adjunct Professor at Georgetown University. He received his Ph.D. from Claremont Graduate University (1975) and his B.A. from Claremont McKenna College (1968). During his military service, he graduated from Armor Officer, Combat Intelligence, Southeast Asia, Airborne, and Electronic Warfare and Cryptologic Staff Officer courses. He is on the Board of Governors of the Keck Center for International and Strategic Studies at Claremont McKenna College, having served previously as its Board Chair. For many years, he was the Director of the Center for Global Security Research at LLNL.

“Cooperation and Threat Reduction: Learning Curves and Forgetting Curves,” Cooperative Threat Reduction Programs for the Next Ten Years and Beyond, 18 September 2017, at http://sites.nationalacademies.org/pga/cisac/pga_181908.

"Nonproliferation Regimes and South Asia: Is there a Meeting Point?" in S. Rajagopal and Sridhar K. Chari, eds., Prospects for Stability in a Nuclear Subcontinent, Bangalore, India: National Institute of Advanced Studies, 2003, pp. 30-49.

"Introduction: Verification and the Challenges to Constructive Engagement with North Korea," in Michael May, ed., Verifying the Agreed Framework, Center for International Security and Cooperation, Stanford University and CGSR (UCRL-ID-142036/CGSR-2001-001) April 2001, pp. 1-6.

"Learning from the Arms Control Experience," in Environmental Threats and National Security: An International Challenge to Science and Technology, Proceedings from the Workshop at Monterey, California, Center for Global Security Research (UCRL-ID-129655), December 1996, pp. 53-70.

"The Beginning of the End or the End of the Beginning," in James Brown, ed., New Horizons and Challenges in Arms Control and Verification, Amsterdam: VU University Press, 1994, pp. 1-8.

"Arms Control: Passing the Torch as Time Runs Out," The Washington Quarterly, Washington, D.C.: The Center for Strategic and International Studies, Summer, 1993, pp. 37-52.