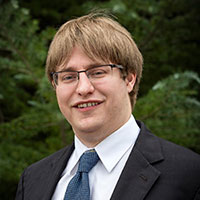 His research supports CGSR’s focus on nuclear and strategic deterrence, with concentrations on Russia and China’s evolving security strategies. He is also undertaking a collaborative project that focuses on the democratization and risk of emerging technologies by focusing on the evolution of nuclear power.

Prior to CGSR, he received his Master’s in International Affairs from Columbia University’s School of International and Public Affairs, where he focused on Sino-Russian relations, international security, and nuclear policy.

While at Columbia, he completed an internship at the Pacific Forum CSIS in Honolulu, Hawaii where he assisted the senior fellow on Chinese nonproliferation, export control, and nuclear power policies. He also holds a BA and BS in Political Science and Economics from Southern Methodist University.