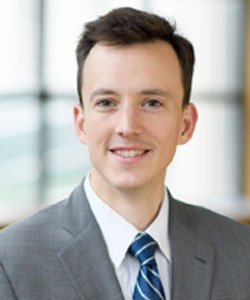 Noel Foster is a Postdoctoral Fellow in Technology and International Security at the UC Institute on Global Conflict and Cooperation (IGCC) based in Washington, D.C. Noel’s scholarly interests lie in the intersection of grand strategy and domestic politics, with a focus on hybrid conflicts and the foreign policy of revisionist states. He studies the mechanisms behind revisionist states' strategic use of influence operations and disinformation, using a mix of qualitative, experimental, and computational methods. In one paper, Noel shows how Russian state-sponsored news content polarizes voters in the Baltics to paralyze policy decision-making in target states. In another, he examines the puzzle of why Moscow prefers weaker, less credible partners in influence operations to stronger partners.

Another strand of Noel’s research focuses on democratization and contentious politics in North Africa and the Sahel, notably the links between climate change and violent politics. His first book, Mauritania: The Struggle for Democracy (2010, Lynne Rienner), centers on electoral autocracy and the simulation of democratization. Noel received his B.A. in Political Science and M.A. in Sociology from Stanford University; his M.A. in EU International Relations and Diplomacy from the College of Europe in Bruges; and a Ph.D. in Politics from Princeton University. Prior to returning to graduate school, Noel served as an aid worker in Mauritania, and as an Air Force officer in several countries.

Plans for Fellowship: Over the course of the UC IGCC Fellowship, Noel plans to complete his book on Digital Disruption and Revisionist Statecraft, adding additional empirical chapters to existing chapters on Russian strategic thought, information operations, influence operations, and Chinese information operations in East Asia in comparative perspective. In one section of the book, he intends to add results from his ongoing research into countermeasures to online information operations, showing which interventions work best at counteracting the effects of online manipulation of voters’ attitudes and preferences. In another, he will draw on recent data on cyber incidents to contribute to the debate on the attribution problem in cyber attacks and its implications for international politics. Edward also hopes to return to the study of Sahelian politics and the effects of exogenous resource shocks on violent politics throughout the Sahel.