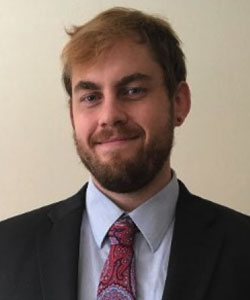 Edward Jenner is a Postdoctoral Fellow in Technology and International Security at the UC Institute on Global Conflict and Cooperation (IGCC) based in Washington, D.C. His primary research interest is climate change mitigation, preparation, and endurance, specifically as they relate to nuclear energy, nuclear non-proliferation, nuclear fuel recycling, and terrorism and conflict. Edward was formerly a Stanton Nuclear Security Fellow at the Center for Nuclear Security Science & Policy Initiatives (NSSPI) at Texas A&M University. His work at NSSPI focused on how nuclear power plants have contributed historically to the pursuit of nuclear weapons proliferation, and how future nuclear energy plans affect proliferation. Prior to working with NSSPI, he was the co-lead of a nuclear reactor operator training program at the University of California, Irvine (UCI). Edward was a licensed senior reactor operator, and in charge of recruitment, teaching, and training for undergraduates working towards their operator’s license. While at the UCI nuclear reactor facility, he gave reactor tours for the public, performed reactor operations including both pulse and steady-state irradiations for commercial and research experiments, and conducted surveillance and maintenance for both the reactor and facility. Prior to his work at the UCI reactor, he was a graduate student in chemical engineering from 2014-2019. During that time, he participated in nuclear science, security and non-proliferation human resource development programs supported by the National Nuclear Security Administration, Nuclear Science and Security Consortium, Nuclear Security Science and Polity Institute, and American Physical Society. In 2018, Edward was a Graduate Fellow at the Nuclear Non-Proliferation Education and Research Center at Korea Advanced Institute of Science and Technology, South Korea where he and his research partner were awarded Best Research Project for their study of Saudi Arabia’s nuclear power program. Edward finished his thesis in 2019, on the subject of spectroscopic monitoring in solution for a nuclear fuel recycling safeguard. Edward holds B.S. in physics and chemical engineering from the University of Arkansas, Fayetteville, as well as an M.A. and Ph.D. in chemical engineering from UCI.

Plans for Fellowship: For the next year as a fellow with IGCC, Edward plans to study how the effects of climate change—such as reduced resource availability and environmental destabilization—could contribute to conflict and ultimately terrorism. With nuclear terrorism a growing concern, Edward will explore the trade-off between utilizing nuclear energy to combat climate change and risking increased conflict and potentially terrorism.