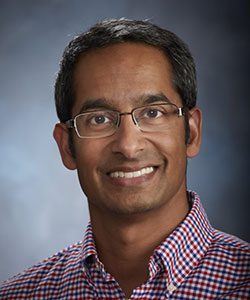 Dr. Siddharth Manay is a technical member of staff in the Engineering directorate, as well as an internal fellow at the Center for Global Security Research (CGSR) at Lawrence Livermore National Laboratory. His CGSR research interests include integrated deterrence and inter-conflict deterrence.

Siddharth works in the Global Security principal directorate in the application of data science to nonproliferation and intelligence problems. Siddharth has previously led investigations into multi-sensor inference and exploitation of thermal imagery. His technical work has focused on exploitation of imaging sensors in a variety of modalities for national security missions.

Siddharth joined LLNL in 2004 as a data scientist. He holds a Ph.D. in Electrical Engineering from the Georgia Institute of Technology (1994-2003), where he developed methods for image processing and computer vision.