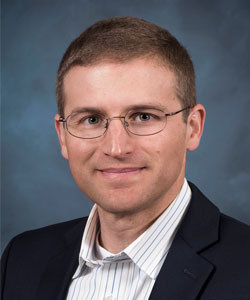 A.J. Simon is the Group Leader for Energy, and the Associate Program Leader for Water Security and Technology at Lawrence Livermore National Lab. He has led diverse technology assessment and systems analysis projects across disciplines including carbon dioxide capture and drawdown, the energy-water nexus, fusion energy, nuclear fuel reprocessing, hydrogen fuel, building energy efficiency, and soldier-portable power. He is the relationship manager for the LLNL-RAND partnership to leverage science, technology and policy analysis, and is the principal investigator for LLNL’s Energy Flow Charts (http://flowcharts.llnl.gov). He served as the Scientific Editor of LLNL’s flagship magazine, Science and Technology Review (http://str.llnl.gov) in 2013, and worked at the Department of Energy's Washington DC Headquarters as a core author on the 2015 Quadrennial Technology Review (http://energy.gov/qtr). In 2018, he completed the Department of Energy’s Oppenheimer Science and Energy Leadership Program.

Prior to joining LLNL, A.J. was an analyst with the Global Climate Energy Project at Stanford University where he helped to manage a $20MM/year portfolio of university-based energy research projects. He was also a lecturer in the department of Mechanical Engineering where he taught a graduate-level course on the thermodynamics of advanced energy systems. From 2001 to 2003, A.J. was a mechanical engineer at GE’s Global Research Center in Niskayuna, NY, where he developed combustion and emissions control technologies for GE’s diesel engine and gas turbine product lines. During A.J.'s graduate work at Stanford University, he demonstrated novel combustion strategies for high efficiency, low emissions automotive engines.

A.J. holds an M.S. and B.S. in Mechanical Engineering from Stanford University.